Can We See the Baby Bump Please?
Director: Surabhi Sharma | 2013 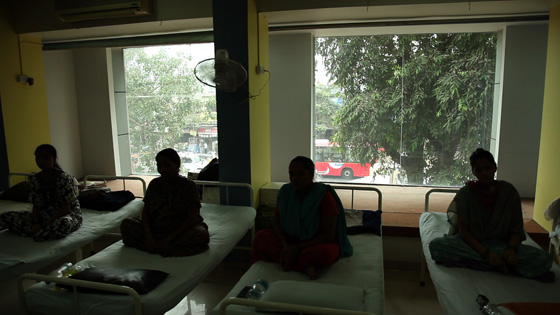 “Can We See the Baby Bump Please?” is a detailed exploration of commercial surrogacy in India. It includes interviews with gestational mothers, providing rare and important glimpses into their lives and the contexts within which they make the decision to enter surrogacy relationships. The film was produced by Sama Resource Group for Women and Health, one of Surrogacy360’s global partners.

The global reach of medical tourism and commercial surrogacy spawns a range of clinics and practices across big cities and small towns in India. Anonymous, often with limited choice, woman’s labour is yet again pushed into the background. A whiff of immorality, the absence of regulation and the erasure of the surrogate’s experience collude to produce a climate of callousness. May we see the baby bump please? meets with surrogates, doctors, law firms,agents, and family in an attempt to understand the context of surrogacy in India.

For more information on the film, including a link to purchase, visit Magic Lantern Movies.

Plus: Following a screening of “Can We See the Baby Bump Please?” at Harvard University in 2015, Judy Norsigian, co-founder and former executive director of Our Bodies Ourselves, and I. Glenn Cohen, faculty director of the Petrie-Flom Center and a professor at Harvard Law School, discussed the legal and human rights issues surrounding surrogacy and egg donation in a global context:

Birthing a Market: Commercial Surrogacy in India
By Sama – Resource Group for Women and Health | India | 2012

Excerpt from the Introduction: 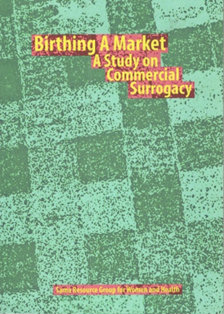 There is an urgent need to initiate processes for a critical understanding of commercial surrogacy, that has assumed the proportion of a transnational industry towards building a collective, feminist response to it. This requires a strengthening of linkages between academia and activism that builds a perspective on the interaction of market, technology, patriarchy, and hetero-normativity as seen in this practice.

Further, the Draft ART Bill – 2010, prepared by the Indian Council of Medical Research (ICMR), necessitates a parallel process of mobilizing a wider response, particularly because this proposed legislation will be the first of its kind in South Asia, and is a step forward in checking the untrammeled commercialization of ARTs. In its current form, the Bill is hugely lacking in addressing this as well as the disadvantaged position of the surrogate.

Being a part of debates on the regulation of ARTs, which currently flourish in India in the absence of any state regulation, Sama has often been confronted with issues concerning citizenship, surrogates’ payments, and the contract between the surrogate and the commissioning parents.

Given this, Sama initiated the present research to gain insights into the lives of those at the heart of these issues—the surrogates—in order to make visible, and to better understand their perspectives, subjective experiences, and lives. The study scrutinizes the existing practices in the selected sites of research. Foregrounding the surrogate’s position in the arrangement and in the industry, the study examines several complexities regarding the terms of the contract, the multiple institutions and actors involved, their expectations and conditionalities regarding the surrogate pregnancy, medical practices and technological interventions.

The case of an Australian couple accused of abandoning their child with his Thai surrogate mother after discovering he had Down syndrome — and taking home his healthy twin — has turned global attention to the murky underworld of international surrogacy.

Such cases have raised ethical and legal dilemmas, which experts say are the inevitable consequences of an unregulated multibillion-dollar industry dependent on impoverished women in developing countries providing a “product” — a child — so desperately wanted by would-be parents in wealthier nations.

In Baby Gammy’s case, which made international headlines this month, the boy’s Australian parents are claiming that the Thai surrogate mother, Pattaramon Chanbua, refused to release the child into their custody and that they lacked the legal right to force her to do so.

This article provides a global overview of laws related to international commercial surrogacy, with a focus on Thailand. It delves into issues specific to the rights of children – such as citizenship and legal parentage – and links to the work being done by the Hague Conference on Private International Law, an intergovernmental organization, on the legal challenges posed by the practice.

Sama is a Delhi-based organization working on issues of women’s health and human rights. A key focus is assisted reproductive technologies (ARTs) and international commercial surrogacy.

Sama documents and makes visible the experiences of gestational mothers and the risks they face in international commercial surrogacy arrangements. The organization examines issues within the framework of gender, class, caste, religion, ethnicity, and other power dynamics within South Asian society and between South Asia and other countries/regions. Visit Sama’s website for more information.

Aside from the acclaimed film “Can We See the Baby Bump Please?” and report “Birthing A Market,” Sama has produced a vital collection of research on ARTs and surrogacy.